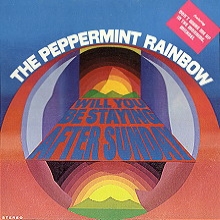 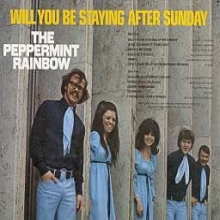 The Peppermint Rainbow consisted of Skip Harris, Doug Lewis, Bonnie and Patty Lamdin, sisters who were originally from Baltimore, Maryland.  My involvement with the band was my first foray into artist management.  Because of my limited experience in the area of management I entered into a co-management arrangement with the late Betty Sperber, who at the time was president of Action Talents in New York.  Betty managed the Isley Brothers, Brooklyn Bridge and a host of other pop artists.  The Peppermint Rainbow was produced by Paul Leka in his Connecticut studio.  Paul was considered a top flight producer at that time having recently produced a big hit record with the Lemon Pipers entitled "Green Tambourine."  The band was soon signed to Decca Records by then label president Jack Wiedenmann.  My path would cross with Jack's again several years later when he, as president of Metromedia Records would sign another band I managed called Doc Holiday.

The first single released was entitled "Pink Lemonade" / "Walking In Different Circles" which got a fair amount of air play but didn't show much as far as sales were concerned.  The second single was entitled "Will You Be Staying After Sunday" / "I'll Be There."  "Will You Be Staying After Sunday " turned into a hit record "right out of the box" as they say.  The record raced up the Billboard and Cashbox charts each week and within three weeks peeked at #6. The follow-up single "Rosemary" / Don't Wake Me Up In The Morning, Michael" has an interesting story.  Decca Records was set to promote "Rosemary" but Betty Sperber and I felt strongly that the "B" side, "Don't Wake Me Up In The Morning, Michael" was a hit.  With some persuasive argument, Decca Records "flipped" the promotion to the "B" side and "Don't Wake Me Up In The Morning, Michael" peeked on the charts at #8.  During the next six months two singles followed - "You're The Sound Of Love" / "Jamais" and "Good Morning Means Goodbye" / "Don't Love Me Unless It's Forever."  Neither record made any significant impact with radio or with the charts.

In April of 1969 Decca Records released an album containing the Peppermint Rainbow's works.  By now, they were fading into distant memory along with The Mamas & The Papas, 1910 Fruit Gum Company, Ohio Express, Tommy James& The Shondell's, and Spanky & Our Gang.  As with all things, there is a season and the Peppermint Rainbow had theirs.  FM radio was taking on a greater role in American music with new artists like Jimmi Hendrix's, Iron Butterfly and Janis Joplin who were capturing an ever widening audience with Woodstock right around the corner.  To my knowledge, no member of The Peppermint Rainbow is involved in the entertainment industry today.