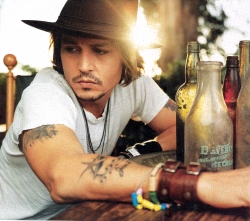 In a May, 2004 interview with "Esquire" magazine Johnny Depp made mention of his experiences with Rock City Angels in the 1980's.

Prior to my involvement with the band, Johnny Depp had joined the group while they were performing throughout Florida in the early 1980's.  The band performed under the names "Abusers" and "Delta Rebels."  In 1983 the group traveled cross-country to Los Angeles playing pick up gigs along the way whenever they were lucky to get work.  I heard some really great stories about car and truck breakdowns, shoplifting food, sleeping in some of the most "forgettable places" and, of course, the most interesting stories are about the women they met along the way.  One true story had Johnny living in Nicolas Cage's old apartment near Hollywood Blvd.  At that time he was so broke that he took the Mexican change in Cage's drawers down to the check-cashing joint on the corner of Hollywood & Whitely so he could buy a hot dog.  It was in the latter part of the 1980's that I came to hear a cassette of the band and enthusiastically pursued the opportunity to manage them.  This quest led me to the group in Memphis, Tennessee.  After meeting with the band twice, making two separate trips from New York to Memphis, the group signed a five-year management contract with me.  It was during this timeframe that the band changed its name to Rock City Angels and signed a recording contract with Geffen Records.  Our A&R representative at Geffen Records who worked with me in putting it all together was Tom Zutaut.  At this time Johnny Depp left the band, traveled to Canada and did the pilot for "21 Jump Street."  It was left to Tom Zutaut and me to find a replacement for Johnny.  Tom suggested I consider Mike Barnes from North Carolina.  Without going into the details of how it was accomplished, Mike Barnes did become the new guitar player.

With the proliferation of unofficial "Rock City Angels" web sites, I feel it is important to debunk and dispel all the absurdly ridiculous rumors, falsehoods and speculation surrounding the reasons for Johnny's departure from Rock City Angels.  I have not seen one single web site that has any semblance of truth concerning the so-called "mystery" of Johnny Depp and Rock City Angels.  I find all the ridiculous fabrications humorous.  I also don't feel it is proper or ethical for me to discuss the relevant personal business of artists I have represented or any of the business that transpired between those artists and record companies, agencies, promoters, lawyers, accountants or, for that matter, any entertainment business entity.  What I will say after reading the Internet "garbage" on the subject is this:  Throughout the entire transition process from Johnny Depp to Mike Barnes, everyone, including Johnny, the band members, attorneys, David Geffen, Tom Zutaut and, I dare say, myself, all conducted business in the most professional manner.

In early May, 1988, nearly eight months after Johnny left the band, Tom Zutaut informed me that everyone at Geffen Records felt so strongly about the Rock City Angels album that it was impossible to settle on which ten songs to put on the record and that David Geffen had agreed to have Rock City Angels become the first double debut album in Geffen Records' history.  The double album would contain 15 songs representing all the songs recorded between November, 1987 and April, 1988.  One of the songs, "Mary," was written by Johnny Depp.  Tom Zutaut requested that I contact Johnny and work out the issues concerning rights to use the song on the album.  We had absolutely no problem working out an agreement.  The attorneys completed the paperwork in short order and "Mary" written by Johnny Depp is the third song on Side A.